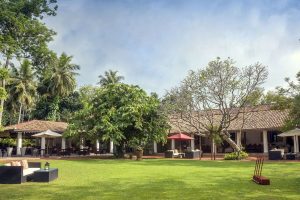 THIS week our guest writer visits Sri Lanka, Adam Jacot de Boinod worked on the first series of the BBC panel game QI for Stephen Fry. He is a British author and avid travel writer. Enjoy the wonders of Sri Lanka.

Of all the tropical islands I have visited, Sri Lanka has the most heady mix of exoticism. Kúpa-mandúka is their local phrase for one who never leaves his home, one ignorant of the world (literally, a frog in a well). But, for me, Sri Lanka was definitely somewhere I knew I would be enriched by and had to visit.

I was soon to relax at my first hotel, the Wallawwa (www.thewallawwa.com). Colombo features a number of iconic colonial-era hotels with its charm and romance of a bygone era.

The drawing room has ‘Fly BOAC to Ceylon’ vintage posters and plays ambient music, lending itself well to the breezy vibe. Set in five acres of tropical gardens, it really proved a secluded boutique bolthole. Next up and down to the coast at Tangalle and the new Anantara resort (www.tangalle.anantara.com).
The verandahs look out to sea and all around the resort are little lobster basket lights giving off a spiders’ web effect. Lounge chairs are actually cemented into two lengthy infinity pools and out to sea fishermen brave the rocks. And it’s mercifully mosquito free. Peace haven or ‘piece of heaven?’ It’s certainly pampering and tranquil.

I felt a real delight in witnessing the source of my food as manual workers, up to their knees in mud in the paddy fields, left behind them immaculate rows of rice. And to taste their rice that evening made me appreciate my food all the more. Close by is Amanwella (www.aman.com/resorts/amanwella). I arrived first at the large, red-pebbled courtyard, then through a an orchard of frangipani trees that suggested a place for convalescence.
There’s a super-sized swimming pool, pleasingly green rather than the usual blue, thus blending into the natural habitat. It’s virtually Olympian length helps to echo the height of the trees that in turn are reflected in the water. And up inland to Lake Koggolo and onto the Kahanda Kanda (www.kahandakanda.com). Fifteen minutes inland and five miles from Galle, this style-conscious hotel looks down from its prominent bluff over a dense twelve-acre tea plantation. As for the feel, it is decidedly colonial. There are old portraits, oil paintings of horse racing, block-print cotton furnishings, antique loo seats and four-poster beds. There are games boards on the verandah and sofas outdoors on the porches.

My next treat was to be at the nearby Maliga Kandy (www.thehideawaysclub.com). It’s part of Hideaways Club Classic Collection portfolio with properties all around the world. It’s perfect for someone who doesn’t want to be restricted to one location or have the hazzle of maintenance. Meaning Mountain Palace, Maliga Kanda is perched on a hill. This large, purpose-built villa is surrounded by wildlife and it was here that I got the true sense of the Sri Lankan paradise many had told me about. There’s music in the jungle. Especially with the dawn chorus. Colourful birds abound, peacocks strut upon their stage while fireflies shine out like mini stars and I was soon a twitcher, straining to spot the cormorants, eagles, kingfishers, blue pigeons and grosbeaks.

I took the most wonderful of all walks down through the village where I felt all of the island’s innocence and timeless charm. Dogs sit out by day to protect the houses and lie on the road at night to enjoy the tarmac’s warmth. A row of houses awaits the sound of ‘Fur Elise’ that heralds the bread truck or was it for ice cream? A multi-coloured school bus goes by. Schoolgirls in their white uniforms have thick platted hair that descends beyond the top of their legs. A washerwoman by the stream thinks twice about agreeing to be photographed amongst her laundry. Elderly ladies parade in pairs beneath their vivid-coloured parasols. Old men stick their legs out at right angles on old colonial bicycles that cause them to adopt staunch, upright postures.

I was next to experience the period charm of a bygone era, at the Amangalla Hotel (www.aman.com/resorts/amangalla). And while clearly the supreme standard of an Aman hotel must have given the building quite some makeover, I sensed nonetheless the residual authenticity. It’s full of character with triangular stairwells, wonky tiles, and those Portuguese terracotta tiles that I much prefer to the red roofs of the more modern Sri Lankan structures. The Zaal (great hall) divides between somewhere to sit and somewhere to eat. It has its original polished teak floors and a grand piano that I sat down to play. What a sublime experience across such a long room under such an echo from the high roof. The thirty bedrooms and suites have been cleverly converted from their original cell dimensions into sections where the arches and gaps lend a sense of privacy. The baths are freestanding and the carpets are from seagrass. There are Pettagama chests and planter’s chairs and the four-postered beds with their Dutch blue bedspreads have neither canopy nor mosquito nets.

Transport has its own challenges even now with the right of way always open to question. So renting a car would not be my suggestion. Tuk-tuks are fun to take and breezy especially on the minor roads. While dishing out advice, I stress you just have to respect the midday intensity of the sun and likewise the savage currents of the Indian Ocean.

I was to spend my last night at the lovely boutique hotel called Maniumpathy (www.maniumpathy.com). It’s tucked away in its own little world . Built over 100 years ago and renovated 10 years ago it opened in 2015. The eight suites with artefacts and vintage furnishings are named after the members of a fifth generation Tamil family from Jaffna (where Manipay was a thriving and wealthy locality). The owner, Hallock, was a ‘mudhaili’ (self-made man). So it’s not strictly speaking a colonial house, rather a family home. It’s in a desirable residential district and bang in the city centre near the National Museum, and the railway and bus termini.

Unlike other popular tropical destinations, Sri Lanka remains relatively untouched and unspoilt. The war is finished, the tsunami is a decade past and the highways now connect the island efficiently. With tourism rates projected to explode over the next few years, now is the perfect time to visit.

Adam travelled with The Holiday Place that has a wide range of holidays to Sri Lanka from just £699, including flights, accommodation and transfers. Call 020 7644 1770 and let the experts tailor-make your holiday or visit http://holidayplace.co.uk to book.