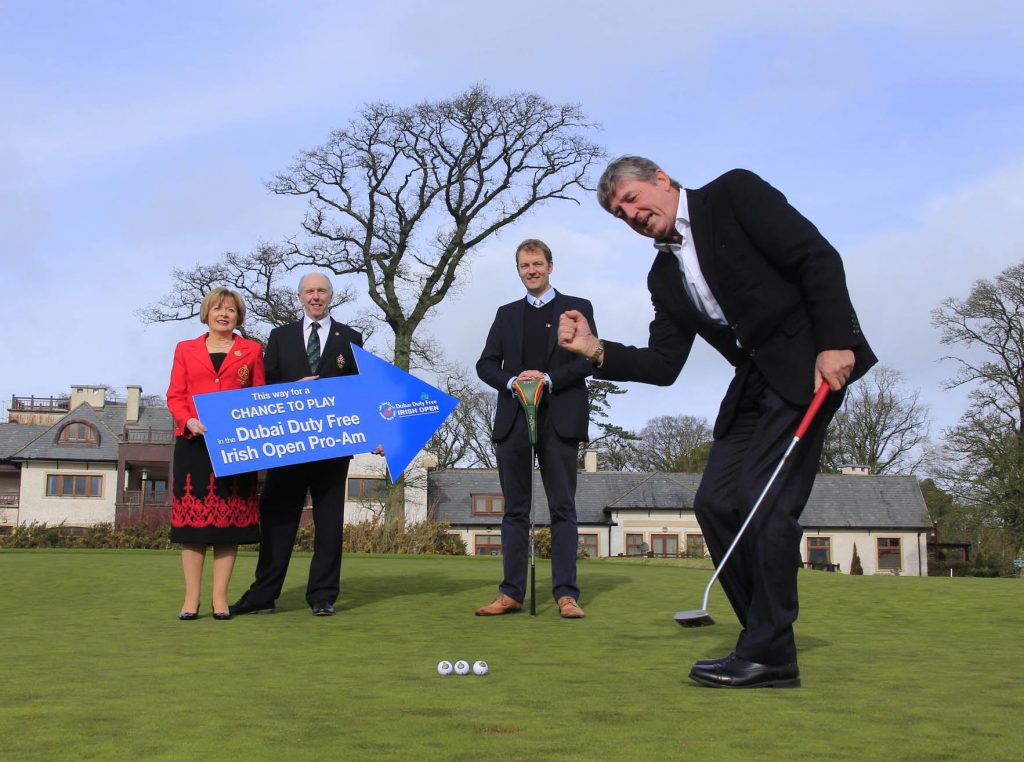 The theme for this year’s Dubai Duty Free Irish Open, hosted by the Rory Foundation at The K Club (May 19-22) is ‘History in the Making’ and that will certainly be the case on May 18 when, for the first time ever, one lucky club team lines up to play alongside a top golfer in the prestigious Pro-Am competition.

The European Tour and Irish Open title-sponsor Dubai Duty Free, which has kindly donated one of its own Pro-Am team spaces for the competition, today revealed the venues and dates for the five ‘Club Challenge’ regional qualifiers as well as the names of the 166 clubs who will be represented.

The qualifiers will all take place between Monday April 11 and Monday April 25 at five of Ireland’s top golf courses, including Powerscourt GC in County Wicklow, Hollystown GC in Dublin, Rockmount GC in Belfast, Dooks GC in County Kerry and Galway Bay Golf Club, all of whom have donated their excellent facilities in support of this year’s Dubai Duty Free Irish Open.

Details of the qualifying events, which are being managed by the Golfing Union of Ireland (GUI) and leading golf magazine Golf Digest Ireland, are as follows:

The Dubai Duty Free Irish Open Club Challenge is one of the key elements of Rory McIlroy’s ‘five point plan’ to encourage golf clubs to help make this year’s Irish Open one of the best yet.

Antonia Beggs of The European Tour said:  “We are absolutely thrilled at the level of response we’ve received from golf clubs all around Ireland wanting to take part in our inaugural Dubai Duty Free Irish Open Club Challenge.  In particular, I’d like to thank Rockmount, Dooks, Hollystown, Powerscourt and Galway Bay Golf Clubs who have been amazing in giving up their courses for the day to host our regional qualifying events.  I suppose if just goes to show that when Rory McIlroy calls on clubs to lend their support to this year’s Irish Open, they all listen!”

Colm McLoughlin, Executive Vice Chairman of Dubai Duty Free, said:  “The Dubai Duty Free Irish Open Club Challenge is a wonderful initiative that gives golf clubs a marvellous opportunity to have the chance to play with some of the world’s top golfers at a top quality event.  We are very pleased to be able to donate one of our own Pro-Am teams to the winning team and even more pleased to see how golf clubs all over Ireland have pledged their support to Rory and embraced this event.”

Pat Finn, Golfing Union of Ireland (GUI) Chief Executive, added:  “This is a superb event which we are delighted to support and it’s great to see so many clubs from all corners of Ireland signing up to take part.  Unfortunately the closing date for entry to this particular event is closed but there are lots of other ways for clubs to get behind Rory and the Dubai Duty Free Irish Open at www.golfnet.ie/DDFirishopen.”

Participating clubs will use existing club competitions to find a Men’s and Ladies’ champion who will then go on to represent their club in regional qualifiers with a national final to be held on the Smurfit Course at The K Club on Monday May 9.

The winning club will be invited to send their team (male and female participant) as well as an official nominated by the club to compete in the Dubai Duty Free Irish Open Pro-Am.

The format for the regional qualifiers and final will be Four-Ball Stableford with handicaps applied in accordance with the CONGU Unified Handicapping System.

History in the Making

As well as offering clubs the chance to play in the Pro-Am, there are plenty of other reasons why this year’s Dubai Duty Free Irish Open is already making history.

Firstly, this year’s prize fund is €4 million, an Irish Open record which is sure to attract some of golf’s most exciting players.

In addition, having officially hosted a sell-out Dubai Duty Free Irish Open at Royal County Down last year, 2016 is the first year that Rory will be hosting a tournament south of the border, through his charity the Rory Foundation.

A portion of all tickets sales this year will go towards the Foundation which was established by McIlroy in 2013 to help children live better lives by raising funds and offering support to children’s charities around the world.

This year will also be the first time that The K Club will host Ireland’s national Open, fittingly on the 10th anniversary of the course hosting Europe’s memorable victory over the USA in the 2006 Ryder Cup.

For more information on the 2016 Dubai Duty Free Irish Open hosted by the Rory Foundation or to purchase ticketswww.dubaidutyfreeirishopen.com.

The Dubai Duty Free Irish Open 2016 is also supported by the Irish Government under the auspices of the Fáilte Ireland and Sport Ireland.