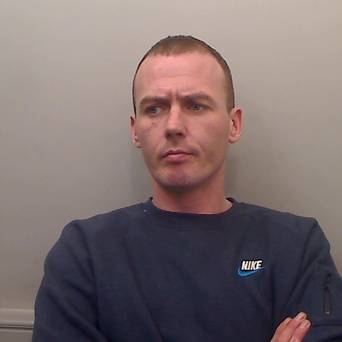 A “dangerous and violent” inmate on the run from prison had been jailed for ten years for knifing a partygoer five times over a scarf.

Yesterday, detectives issued his picture and an urgent public appeal to try and track down the 33-year-old.

Detective Inspector Jenna Fitzpatrick said: “We know that Mr Turley travelled to Belfast on Saturday evening and was then sighted in the Newcastle area on Sunday.

“We are conducting extensive enquiries into each of these reports. However, we cannot rule out that Mr Turley may be travelling within Northern Ireland.

“I would urge the public not to approach Mr Turley as he has an extensive history of violence and may pose a risk to the them.

“I would also appeal to Mr Turley to hand himself in to the authorities without any further delay and ask anyone who knows of his current whereabouts or who has any information to contact police on 999.”

Belfast Daily can reveal that seven years ago Turley was sentenced to ten years in prison at Belfast Crown Court.

Judge Mr Justice Hart told Turley he would have to serve his sentence in a Doncaster hospital because he cannot receive treatment for “emotionally unstable and dissocial personality types” in Northern Ireland.

Turley, from Torrens Avenue in north Belfast, was originally charged with attempting to murder Anthony Braniff on January 1, 2007.

However, prosecutors didn’t proceed with the charge after he pleaded guilty to wounding with intent.

He also admitted to making threats to kill the party hostess Joleen Drummond and her parents.

The court heard that when 24-year-old Mr Braniff went to Miss Drummond’s party in the Oldpark area, it had been raining and mistaking Turley’s scarf for a towel, mopped his wet head with it when he arrived.

Turley became angry at this and although Mr Braniff apologised, a fight broke out with Turley being headbutted and the pair were separated again.

Mr Justice Hart said the “the tension continued” and Turley then attacked Mr Braniff with a kitchen knife, stabbing him five times in the upper body.

The judge said that from medical reports and a statement taken from Mr Braniff, it was apparent that he suffers from Post Traumatic Stress Disorder, had had to give up his job “and that the long term consequences for his physical and mental health will be considerable and may be permanent”.

He told the court that after the stabbing, Turley “embarked upon what can only be described as a campaign of threats and intimidation” towards Miss Drummond and her family.

Quoting from her statement, Mr Justice Hart said Turley threatened to “burn your house down with you and your son in it” if she made a statement to police.

Miss Drummond moved in with her parents but even then, Turley phoned the house “up to 10 times a day, sometimes more, including while he was an in patient at Knockbracken Healthcare Park telling her father: “I’ll be getting out of here soon enough and I’ll be coming to see you.”

A phonecall was made to Miss Drummond’s mother in which Turley said “your time is up”.

Mr Justice Hart revealed that Turley has a “substantial record” which begins the day after he turned 14 and includes convictions for actual bodily harm, possessing a weapon, robbery and causing his mother to fear violence from him.

“It is apparent,” said the judge, “that he is a violent and dangerous young man who has no compunction about resorting to violence or threats of violence…”

The judge said the jail term, as well as the one year probation term Turley agreed to serve, “could, it seems, at least reduce the danger to the public” when Turley is released.

Now cops are in a race against time to catch Turley before he commits any further offences.