DISSIDENTS BLAMED FOR ATTACKING SINN FEIN CARS AHEAD OF ELECTION 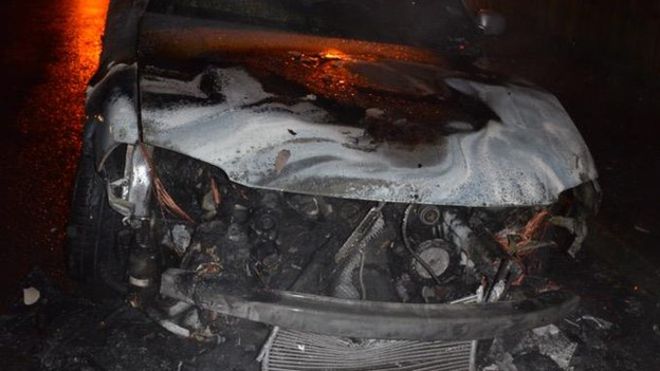 One car was set alight in Kildrum Gardens of Derry around 2 am this morning.

Half an hour later the windows of a car were smashed at Oakbridge Park in the city.

The cars were owned by Sinn Féin councillors Colly Kelly and Sandra Duffy.

Two men, 17 and 23, have been arrested on suspicion of criminal damage.

The deputy first minister tweeted this morning that there was “no doubt anti-democratic dissidents” were responsible.

He also tweeted: “Peace and democracy are the only way forward. Ongoing concerted dissident attacks on Sinn Féin elected representatives and their families will fail.”

His home was attacked with paint bombs at the weekend.

Assistant Chief Constable Stephen Martin told BBC Radio Foyle that he believes the attacks are linked to the general election.

“These attacks pose a risk to lives. They are reckless,” said the former Derry police commander.

“Martin McGuinness had his house attacked with paint this week. When you add all that up then there is a high probability that this is all linked to the election.

“We are determined to do our best to place people before the court.”