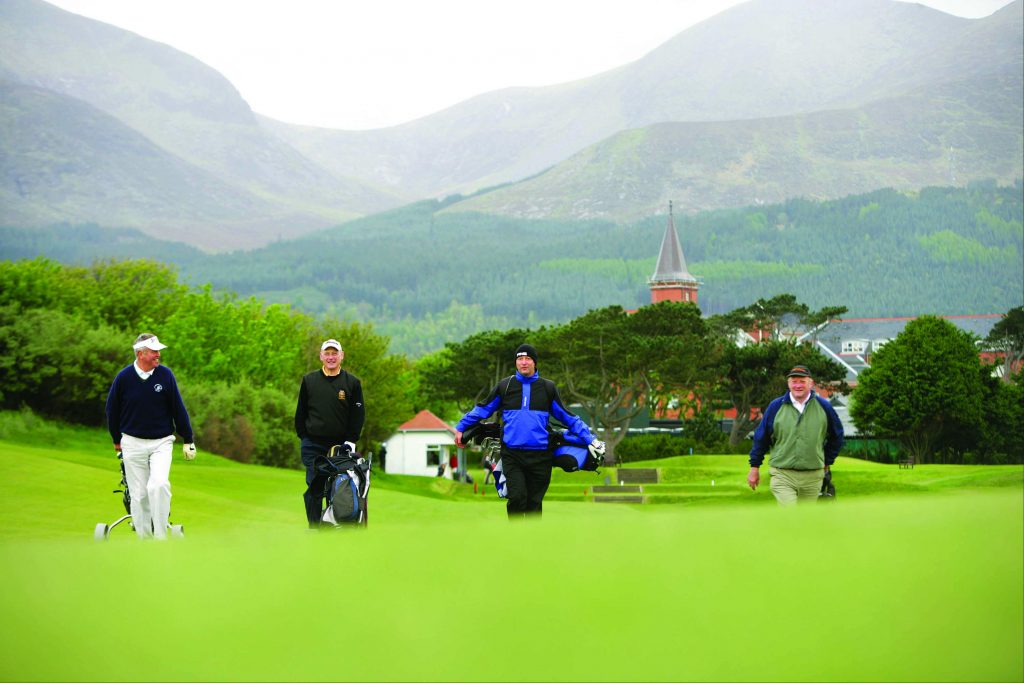 FOLLOWING news that five of the world’s top 20 golfers and five former golfing Numbers 1s are playing this year’s Dubai Duty Free Irish Open hosted by The Rory Foundation, Tourism NI has today announced its line up for the Pro Am competition at Royal County Down on the 27th May.

Recently-retired horse racing legend AP McCoy leads the pack of famous faces and well known names in Newcastle for the Pro Am competition.  This will be his first major engagement since announcing his retirement and sports fans are expected to give him a rapturous welcome as he tees off.

Footballing great, Pat Jennings, who played for Northern Ireland, as well as Arsenal and Tottenham Hotspur, is hoping to score a win as well as former Ulster Rugby star, Stephen Ferris.

The so-called, ‘king of spin’, former Australian cricketer, Shane Warne, regarded as one of the best bowlers in the history of the game, will get the chance to show off his skills with another type of ball.

Dundrum funny man Patrick Kielty is another famous face who will be looking for local support as he makes his way to the 18th hole.  And Irish broadcaster, George Hook, who is also an author and rugby pundit, will fight for his chance to be crowned the Pro Am champion. George is the presenter of drive time show, The Right Hook, on Irish radio station, Newstalk Radio.

Enterprise, Trade and Investment Minister, Arlene Foster, said the ‘star power’ will bring an extra dimension of fun for those who come to enjoy the competition.

Arlene Foster added: “More than 80,000 spectators are expected to visit one of our most popular and scenic seaside towns andalready tens of thousands of tickets have been sold for the event.

“We hope that all of the Pro Am players, celebrities or not, plus their family and friends, enjoy their time in Northern Ireland and we will watch with great interest to see who is crowned the ultimate victor on May 27.”

Anyone wishing to witness the action first hand can purchase tickets at www.irishopen.ie.  Tickets cost between £30 and £35 per day and families will be delighted to hear that kids under the age of 16 will be admitted FREE as long as they are accompanied by an adult (up to four children are allowed with one paying adult).

Corporate hospitality packages are also available for the event at a cost of £300 + VAT per person.  Already sold out on Friday May 29, these exclusive tickets include course admission with reserved grandstand seat on the 18th green, an official programme, reserved VIP parking (for one or two people), and generous hospitality in the Grand Ballroom in the neighbouring Slieve Donard Hotel – including breakfast followed by a Champagne Reception, a buffet lunch served with fine wines, afternoon tea and a complimentary bar.

For more information on the Irish Open 2015 or to purchase tickets, visit www.irishopen.ie.   For information on accommodation offers and golf in Northern Ireland, visit www.discovernorthernireland.com/irish-open-2015