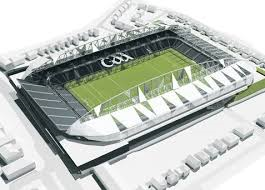 How the £70 million redeveloped Casement Park could have looked

MLAS have been told of unfounded claims of bias at the heart of the new GAA stadium at Casement Park in West Belfast.

Paul Scott, chair of the Safety Technical Group within the Department of Culture, Arts and Leisure (DCAL) claims to have come under pressure about the safety of the new Casement Park proposals.

He was speaking to MLAs on the DCAL committee sitting at Stormont today where he claimed the department tried to remove because he wouldn’t sign off on the Casement Park plans on safety grounds.

Mr Scott said: “I and Sport NI have received undue pressure from the GAA and from DCAL about my view of the safety of the Casement Park plan.

“An email was received that our comments our were at odds with the requirements.”

Mr Scott says the GAA “made a number of accusations about Sport NI officers on the STG” including that the STG had treated the Casement Park project differently to the development at Windsor Park and Ravenhill”.

The GAA has been offered the opportunity to look at new design proposals, says Mr Scott, but along with DCAL they “appear to be reticent”.

He says if there are concerns around the STG’s assessment, obtaining a second opinion from the Sports Ground Safety Authority is the “most appropriate and logical step” as they have knowledge of the green/red guide (the safety industry’s standard recommendations) and are independent.

Mr Scott said an architect warned that it would take 22 minutes to get 38,000 people out of Casement in an emergency.

However, he says DCAL has yet to provide an emergency exit strategy, despite repeated requests.

The development at Casement is currently on hold after residents in Andersonstown won a landmark case last year to halt its revamp.