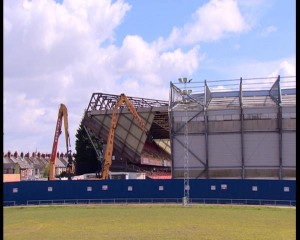 THE demolition work of the West Stand at Windsor Park has started today.

Two weeks ago, a preliminary structural report from engineers advised that the stand should be demolished after cracks were discovered on the Kop Stand shortly after Northern Ireland’s Euro 2016 win over Finland in March.

IFA chief executive Patrick Nelson said last week that plans had been put in place to knock down the Kop as a result of the structural damage.

Nelson said that although the stand won’t be in use, the crunch, Northern Ireland Euro 2016 qualifier against Romania on June 13 will still take place at Windsor Park in front of 10,000 fans.

Building contractors for Windsor Park, O’Hare and McGovern, have insisted that they will have the stadium ready in time.

Project manager Martin Lennon said: “We have shipped a number of seats which are in transit at the moment and we are air freighting some more seats.

“All those seats are the permanent seats for the stadium within the East stand (Railway) and South east corner and some of the South Stand. Seats will be installed to ensure patrons will be safe and the ground will be safe for use.

“The East stand holds in the region of just under 3,000 and we have another 1, 000 seats to accommodate around the remainder of the stadium so our intention is to have the permanent seats there and believe that goal can be achieved.”