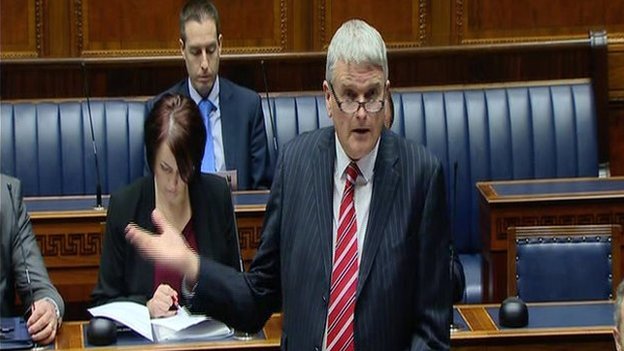 The probe was launched the PSNI received a complaint, say the police.

The DUP MLA provoked outrage after claiming children brought up by gay men were more likely to be abused and neglected.

The MLA made his comments in south Down during the the Westminster election hustings trail.

He has since apologised saying citing stress due to personal circumstances over the past few weeks.

His party leader Peter Robinson is standing by him saying the south Down MLA had apologised.

The Health Minister’s remarks comments have been widely condemned.

Alliance candidate for North Down Andrew Muir – who is openly gay – said the Health Minister should be “ashamed’’.

“I am disgusted by the DUP Health Minister’s comments,’’ said Mr Muir.

“Homophobia and bigotry have no place in Northern Ireland.

“The DUP and Minister Wells should be ashamed.’’

Before apologising, the Health Minister said his remarks were misrepresented.

He said that during a debate in South Down on Thursday evening, he refused to agree with an audience member that “marriage should be redefined”.

“At the hustings event, I said that marriage was a stable environment to raise children. I am saddened that some people were trying to misrepresent my comments.

“Where there are non-stable relationships involving children, whether heterosexual or homosexual, the children suffer. I make no distinction between anyone who neglects a child on the basis of their sexual orientation.”