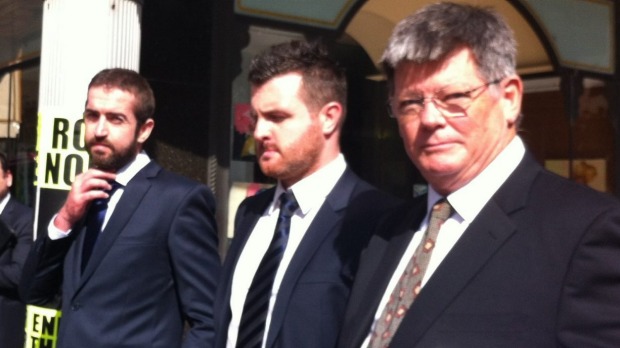 A BALLYCASTLE man who put his brother into a coma with a single punch outside a nightclub in Australia has cheated going to jail after receiving a 13-month suspended sentence.

Barry Lyttle, 33, hugged his brother and victim Patrick Lyttle as Magistrate Graeme Curran handed down his decision, which will allow the family to return home to Ireland.

He had pleaded guilty to recklessly causing grievous bodily harm earlier this month.

Mr Lyttle accepted that following an argument with Patrick on Bayswater Road, Kings Cross, Sydney in the early hours of January 3, he inflicted a single, heavy punch to his brother’s head.

Patrick, 31, fell backwards on to the footpath, suffering a serious head injury.

He was placed on life support at St Vincent’s Hospital and spent a week in a coma before making a sudden improvement in mid-January.

Patrick has since spoken out publicly in support of his brother and asked for the charges against him to be dropped.

He told his brother’s sentence hearing on April 16 that the only way for him to heal fully was for his brother to be allowed to go home.

“When my family is healed I will be healed,” Patrick told the court during an emotional victim impact statement.

“Victims often want to see deterrence. But everyone can see how much my brother has suffered.”

Patrick told the court that, should his brother be allowed to go home, the pair intended to travel around Ireland together, speaking to young people about the devastating consequences of violence.

Barry’s barrister, Chris Watson, asked Magistrate Curran to take this “restorative justice” work into account when considering an appropriate sentence for his client as well as the fact that he had pleaded guilty.

He said the punch was a “very emotional, spur of the moment act” that immediately followed being aggressively pushed, and that Barry had subsequently shown “an extreme level of contrition and remorse”.

“This is one of the very rarest sentences where your honour might find that a sentence other than full time custody is appropriate,” Mr Watson said.

Mr Curran said that, having weighed up the “very unique” circumstances of the case – particularly Mr Lyttle’s obvious remorse for what he had done – with the need to deter violent behaviour in the community, a suspended sentence was “the most appropriate punishment”.