FIVE ARRESTED BY POLICE IN BELFAST OVER RACE HATE INCIDENTS 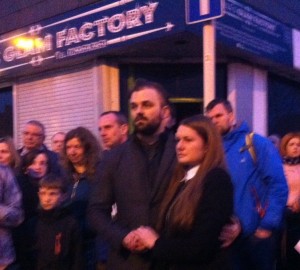 DETECTIVES in Belfast have arrested four men and one woman in relation to a number of hate crime incidents across the city in the last 24 hours.

Highlighting the incidents Superintendent Paula Hilman said: “At approximately 8.30pm on Tuesday 14th April, police arrested a 70 year old man on suspicion of threats to kill and possession of an offensive weapon in the Westland Road area of North Belfast.

“He has since been charged to appear in court in relation to this incident.

“In a separate incident in the early hours of Wednesday 15th April, police arrested a 39 year old man and a 37 year old woman on suspicion of common assault in the Donegall Road area.

“Police received a report that at around 1am, a female customer in a takeaway restaurant was racially abused by a group of males and females and had food thrown at her.

“The man and woman have since been released pending a report to the Public Prosecution Service.

“In a further incident on Wednesday 15th April, police arrested a 51 year old man on suspicion of common assault and disorderly behaviour in the Castle Place area.

“Police received a report that at around 1am, the man had tried to gain access to a restaurant at Castle Place and was aggressive and racially abusive to staff.

“He has been charged to appear at Belfast Magistrates’ Court next month in relation to this incident.

“At around 1.30am, also on Wednesday 15th April, police arrested a 22 year old man on suspicion of common assault in the Lisburn Road area following a report that a woman was punched, spat at and verbally abused. This incident is being treated as a sectarian hate crime.

“The man has been released pending a report to the Public Prosecution Service.

Superintendent Hilman continued: “We are committed to keeping people safe. I understand that hate crime has a psychological and emotional effect on victims and the wider communities.

“We need to remove all incidents of hate crime from our streets and ensure that victims have confidence to come forward and report to the Police. We know that over the past few weeks there have been a number of hate crimes across Belfast.

“However, I would like to reassure the public that the Police Service of Northern Ireland treat all hate crimes seriously and will continue in our efforts to bring people before the courts.”

As yet, no arrests have been made over a loyalist arson attack on a nail bar salon owned by Lithuanian bride-to-be Asti.

Last night around 100 people held a vigil outside her gutted shop in Castlereagh Street to show solidarity with her.

Several thousand pounds has been raised by the local community for her.