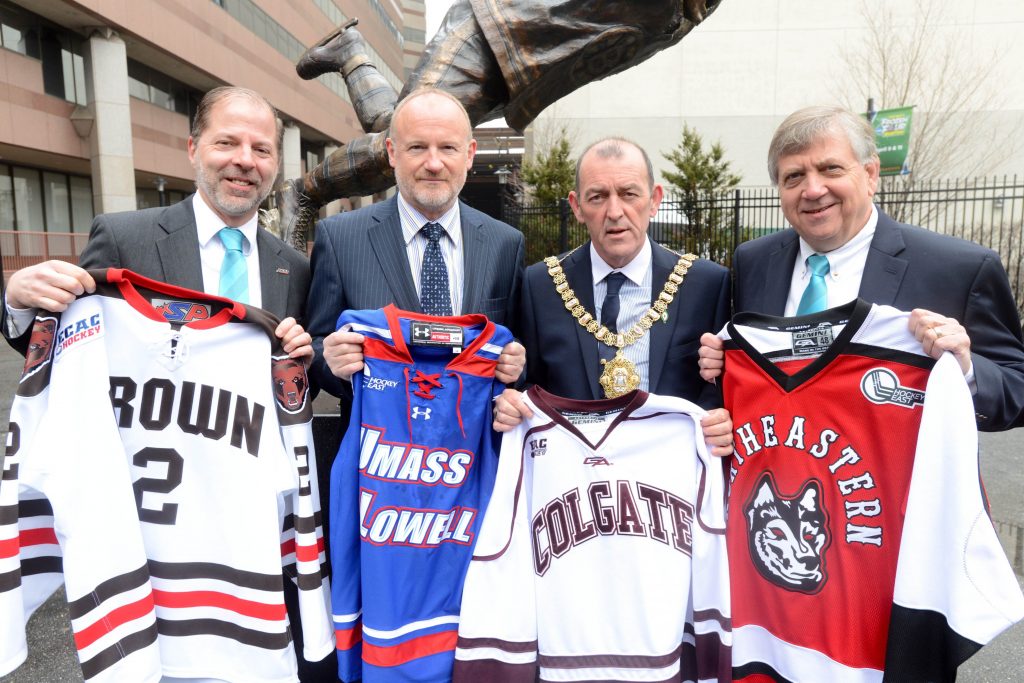 This will be a world first for the NCAA as it is the first time the league has taken to the ice to play competitive games outside the USA.

The four-team tournament is expected to draw large numbers of spectators from across Northern Ireland, the Republic of Ireland, GB and America.

UMass Lowell, Northeastern University, Brown University and Colgate University have all agreed to play for the Belpot Trophy in Belfast’s Odyssey Arena. Each team competes in the NCAA division 1, the top level of university ice hockey in the United States.

To complete a bumper weekend of hockey, there will also be Elite League matches on the Saturday and Sunday involving the Belfast Giants.

The Lord Mayor of Belfast, Councillor Arder Carson, is undertaking his first civic visit to Belfast’s Sister City of Boston this weekend, to officially announce details of the major sporting event alongside the Mayor of Boston, Marty Walsh.

During his trip to Boston the Lord Mayor will meet with a number of key influencers to help promote Belfast and its Sister Cities link with Boston on the international stage.

“The Sister City agreement which we signed with Boston last May is designed to foster stronger economic development, trade and investment, tourism, youth, cultural, faith based exchange and educational linkages between our two cities,” explained the Lord Mayor.

“Bringing this prestigious tournament to Belfast is one of the first substantive results of the agreement, and we are delighted that, even before the first puck has been hit, there already is a commitment to play it here for a further four years.

“It is our hope that the success of this tournament will help stimulate further exchanges, especially in terms of trade missions and educational links.

“Bringing this tournament to Belfast will be a great boost to our economy. The global media coverage this will attract is likely to bring a very positive off-spin for Belfast too.”

Speaking at the launch of The Friendship Four in Boston, Eric Porter, Chairman of the Odyssey Trust, said: “Ice hockey is a cross community sport in Belfast and this is one of the main reasons the Belfast Giants have been able to have success over the past 15 years.

“The Friendship Four will be the first time that teams at this standard of ice hockey will play in Belfast and we expect our fans to be very excited about seeing it at their home arena.

“It is an opportunity to give back to the communities that have supported us over the years and we truly want to make this an event that is open to all.”

“The NCAA offers a highly sought after scholarship system for student athletes which is something we would like to introduce in Belfast.

“It presents a valuable opportunity to students who may not otherwise have the option to be educated to university level. With the recent Boston-Belfast sister city announcement, we would like this game to be used as a bridge to tie these two great cities at the post-secondary education level.”

Mayor Martin J. Walsh said: “During my time in Ireland, I saw first-hand how sports, and hockey in particular, play an incredible role in bridging communities.

“I am thrilled to announce the first tournament for the Belpot Trophy this fall. I would like to thank former Mayor of Belfast Máirtín Ó Muilleoir for his original partnership in this ambitious exchange and his continued hospitality towards Boston and Lord Mayor of Belfast, Councillor Arder Carson, and the Belfast City Council for their commitment to making this tournament become a reality.”