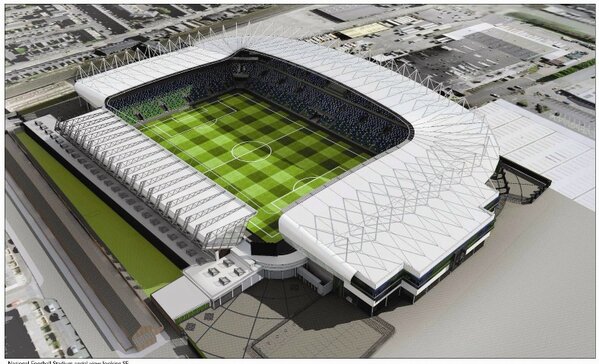 THE Northern Ireland Supporters Club chairman has called for a meeting with the Irish Football Association over possible subsidence at Windsor Park.

Club and international matches at the Belfast stadium could be in doubt after the West Stand was sealed off.

Cracks in its structure were spotted on Tuesday. The IFA says it is waiting for a report from engineers.

The Irish Cup final on 2 May and Northern Ireland’s Euro 2016 qualifier with Romania on 13 June are pencilled in.

Gary McAllister of the Amalgamation of Northern Ireland Supporters Clubs said the IFA had three options for the Romania match if the stand had to be shut down:

He said this was all “hypothetical” until the IFA announced the findings of its structural inspection.

Building work behind the stand has been ongoing in recent weeks as part of the redevelopment of the area around Windsor Park, but it is not known if this is directly related.

The stand was filled to capacity with Northern Ireland fans on Sunday for its 2-1 over Finland,

Linfield and Crusaders are scheduled to meet at Windsor Park on Saturday in a top-of-the-table Irish Premiership match.

“The Irish FA (IFA) became aware on Tuesday morning of some damage having been caused overnight to the West Stand,” the IFA said in a statement.

“We are currently awaiting a report from the structural engineers.”