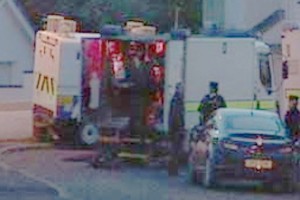 POLICE say a security alert in north Belfast has ended after it was declared a hoax.

Army Technical Officers were tasked to Voltaire Gardens following the discovery of a suspicious object at a vacant house.

A number of homes in the area were evacuated and Voltaire Gardens was closed to traffic.

It is the second incident in the street in a few days.

On Tuesday night, a pipe bomb was left at a house on the same street.

Detectives are trying to establish a motive.