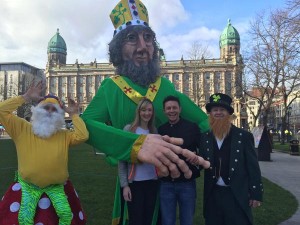 15,000 people enjoyed the St Patrick’s day parade but 33 people were arrested by police

POLICE say officers made 33 arrests in south and east Belfast on St Patrick’s Day and the early hours of this morning.

They said the arrests were in connection with offences including possession of drugs, robbery, burglary, assault and criminal damage.

Police said “upwards of 15,000 people” had “enjoyed the family atmosphere” in the city.

It said “a small number of individuals” chose to engage in anti-social and criminal behaviour.

“This could lead to them to receiving a fine and a criminal record,” the PSNI added.

There was trouble in Belfast city centre when a 12-year-old girl was struck on the head with a bottle at Castle junction.

A 33-year-old man was arrested.