BELFAST IT FIRM KAINOS TO CREATE OVER 400 NEW JOBS 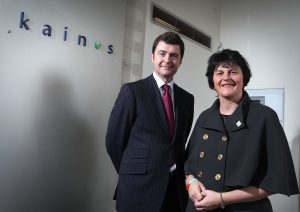 THE Belfast-based IT firm Kainos has announced a major expansion that will create 403 new jobs.

The company currently employs more than 550 people in Northern Ireland, the UK and Poland.

Thirty of the new jobs will be in Derry.

It has been growing rapidly in recent years helped by a series of big contract wins in the public sector.

Its patient records software is used in around 70 hospitals in England and Wales.

The company was founded almost 30 years ago partly as a spin-out from Queen’s University.

The university still holds a major stake in the company which is run by Managing Director Brendan Mooney.

“I congratulate Kainos for this investment with the new jobs contributing £12.4m annually in salaries to the local economy.”