BLIGHTED AREAS OF NORTH BELFAST TO GET AN OVERHAUL 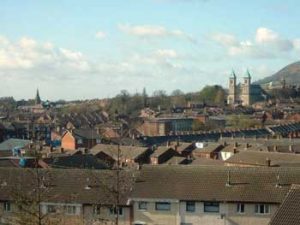 ONE of the most divided parts of north Belfast is to receive a government backed facelift.

Ardoyne has been the scene for contentious loyal order parades which frequently spilled over into rioting by republicans or loyalists targeted at the police.

It is to be part of a regeneration project with neighbouring Ballysillan which will include the creation of more shared spaces and a general facelift for the area.

Urban villages have already been created in the Lower Newtownards Road, Colin and Shankill areas of Belfast and are a form of development zone where a local forum will make decisions on tackling problems within the community.

The Together: Building A United Community, good relations and anti-sectarianism strategy from the Office of First and Deputy First Minister proposes creating four urban villages in Belfast, saying: “The aim is that each urban village will be designated a development zone and a local board created.

Some urban villages in Belfast have focused on creating shared spaces, while others concentrate on tackling dereliction or boosting training and employment.

“The creation of a further urban village project in Ardoyne and Ballysillan underpins this commitment and will make further strides to help tackle division, dereliction and decay and support communities to live together in a united and reconciled society.

“This project aims to create strong, healthy and happy communities through significant investment in local communities and infrastructure.

Deputy First Minister Martin McGuinness said: “The Executive is keen to provide residents every opportunity to design and contribute to their future. This includes decisions regarding the development of amenities and the overall infrastructure in the area.

With people who live in these areas identifying priorities and making key decisions there will be a renewed sense of ownership and pride.”