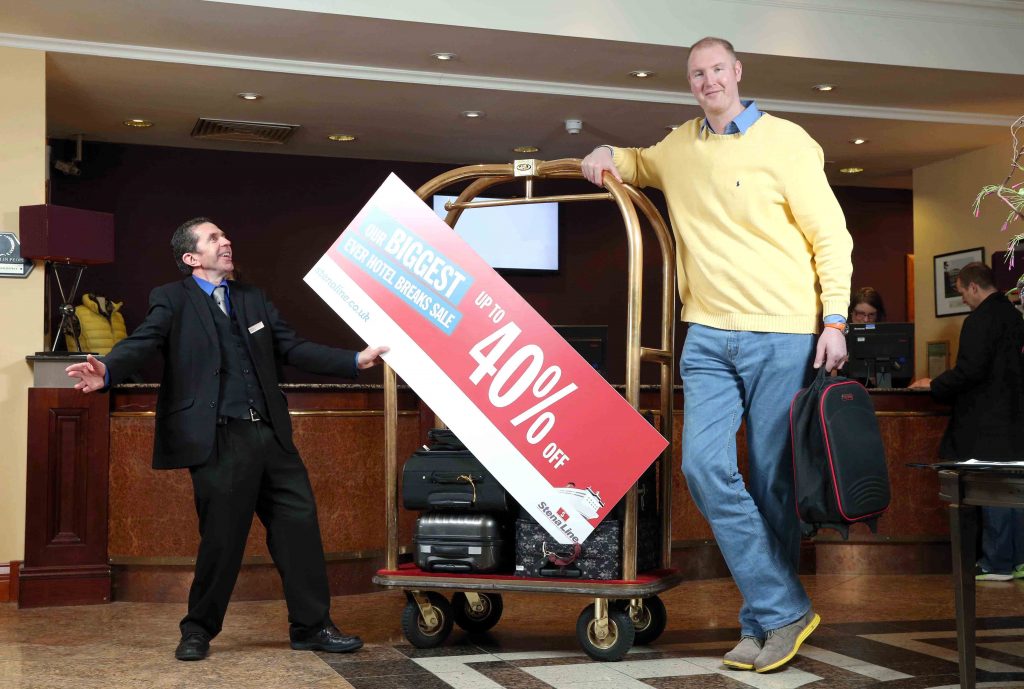 Stena Line’s massive January sale, which runs from January 20 until January 28 for travel until June 15, offers holidaymakers a choice of cut-price deals with savings of up to 40% when you buy your ferry and hotel together, with a choice of more than 2,500 hotels across Britain.

So to give the company’s unprecedented sale some ‘stand out’, or rather ‘stand up’, appeal, Stena  enlisted the help of Neil Fingleton from Newcastle (Co Durham) who at a staggering 7’ 7” ¾ stands head and shoulders (…and torso!) above any other living person in Europe.

“January is the key time of the year, especially with the travel industry, when people are looking to max out on great value deals which is why we have developed a range of hotel and travel breaks with  up to 40% off, our BIGGEST ever sale!” said Stena Line’s Head of Travel, Orla Noonan.

Orla Continued:  “Our short nine day booking window opens up a large range of popular travel calendar dates between now and June 15 for our customers including a romantic Valentine’s trip, Half term, an Easter break, May Day long weekend or just simply an opportunity get away from it all for a few days.  For a small £50 deposit you can secure a great value get away at the time you want to go, so why not BIG up 2015 with a Stena Line hotel break. ”

Prices start from *£99 per person sharing for a two night hotel break including return ferry travel by car and you can choose from some of Britain’s most popular hotels including Travelodge, Hilton, Radisson Blu and Park Inn.