CONTROVERSIAL MAGAZINE CHARLIE HEBDO TO GO ON SALE IN BELFAST 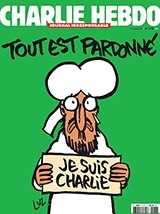 THE latest edition of the French satirical magazine Charlie Hebdo is expected to go sale later this week in Belfast.

It comes as the first three million copies of the magazine sold out in France one week after the massacre at the office of Charlie Hebdo.

W H Smith said it is not stocking the magazine but it is expected that independent distributor Eason will sell it in a number of its stores.

Other independent newsagents in Belfast and across the province are also expected to take some copies.

One newsagent told Belfast Daily: “I want to buy one and keep it as a collector’s item. I am sure other people will do the same and also show support to those people who died in Paris.”

Long queues have formed at newsstands in France for the latest edition of satirical magazine Charlie Hebdo.

Five million copies are being printed – a week after Islamist gunmen murdered 12 people at its offices and five others in subsequent attacks in Paris.

The cover shows a cartoon depicting the Prophet Muhammad weeping while holding a sign saying “I am Charlie”.

Al-Qaeda in Yemen claimed the attack on the magazine in a video purportedly from the group.

It is believed earlier cartoons of the Prophet prompted the attack on the magazine.

“I am Charlie” emerged as a message of support for the magazine following the attack on 7 January, which left eight journalists, including its editor, dead in addition to four others.

In a separate attack in Paris two days later, four Jewish men died after an Islamist gunmen took hostages at a kosher shop in the French capital.

A police woman was shot dead in a third shooting believed to have been carried out by the same attacker.

Three million copies of the latest edition of Charlie Hebdo were originally printed for distribution.

Copies in France quickly sold out on Wednesday morning.

Editors then decided to increase the print run to five million.