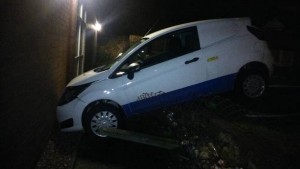 POLICE didn’t have far to go to nick a drink driver….after he crashed into a local nick!

Cheshire Police tweeted an image of a small hatchback at an awkward angle after it ploughed into a station.

Police said it “rolled” off a car park close by and into Frodsham station shortly after midnight.

A 49-year-old man was arrested on suspicion of drink driving and remains in police custody.

“Man arrested for #drinkdrive after losing control on a car park and crashing into Frodsham police station. #epicfail.”