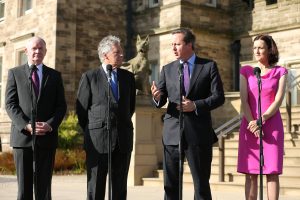 THE First and deputy first minsters fly out this morning for talks in London with Prime Minister David Cameron.

They will join Scottish and Welsh leaders for the talks at 10 Downing Street.

The talks come three days after Mr Cameron left Belfast on Friday without reaching agreement over all party discussions on flags, the past, parades and welfare reform.

He had offered a financial package of £1 billion over five years.

But it was roundly rejected by all the main political parties in the Stormont Exeutive.

The Belfast talks are aimed at resolving outstanding disputes over flags, parades, the

Today’s Downing Street meeting had been arranged weeks before Mr Cameron presented his financial package to the parties at Stormont.

His financial is not part of today’s talks but it is expected to be raised during private discussions between the PM and Mr Robinson and Mr McGuinness.

NI Secretary of State Theresa Villiers said the Belfast talks were now a crucial stage ahead of Christmas.

Fresh talks between the British and Irish governments and the Stormont Executive parties will resume in two days time.