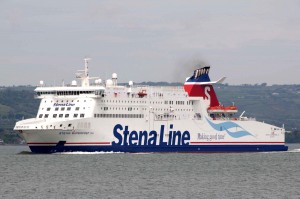 STENA Line has dropped anchor on services from Cairnryan to Belfast after a ferry collided with part of the south west Scotland terminal.

The incident happened as the vessel was coming into dock early on Tuesday.

Sailings between the Dumfries and Galloway port and Belfast have been suspended since the incident to allow the ship to be examined.

In a statement, Stena Line said there were no injuries and all passengers and crew had disembarked as normal.

The ferry operator said all its services had been cancelled until at least 7.30 pm  on Thursday for an investigation to continue.

“All relevant port and marine authorities were contacted as part of Stena Line’s standard operating procedures,” the statement said.

“As a result of the ongoing inspection of the ship, port facility and deteriorating weather conditions, all sailings from Belfast and Cairnryan have been cancelled until at least 19.30 tomorrow.

“All affected customers have been contacted and Stena Line would like to apologise to all customers who have been inconvenienced by the incident.”

A decision on the 7.30pm departures from Belfast and Cairnryan will be made “as early as possible tomorrow and communicated to customers”, the statement concluded.