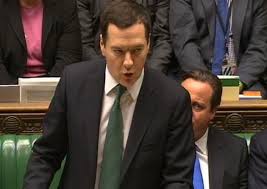 Chancellor George Osborne spells out the details in his Autumn Statement

THE political parties in Northern Ireland were given a nudge today to resolve divisions in the current talks process.

Chancellor George Osborne said told MPs that if the talks succeed, the Government would move towards the devolution of corporation tax powers to the Stormont Executive.

But that will depend if the talks can succeed in reaching an agreement before Christmas.

Otherwise, if the talks run into the New Year, government officials believe no consent will be agreed as parties get into General Election mode.

During his Autumn Statement speech today in the House of Commons, Mr Osborne told MPs: “Today I announce that we recognise the strongly held arguments for devolving corporation tax setting powers to Northern Ireland.

“The Treasury believes it can be implemented provided the Northern Ireland Executive can show that it is able to manage the financial implications.

“The current talks will see if that’s the case. And if it is, the government will introduce legislation in this Parliament.”

The move is being as a sweetner to the DUP who could hold some sway in the Commons chamber if there is a hung parliament next May after the General Election.