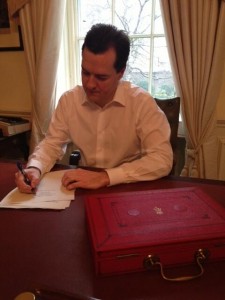 CHANCELLOR George Osborne is to announce later today whether he will give corporation tax raising powers to Stormont.

If he does, it will be seen as a sweetner deal to the DUP in the hope of securing their votes if their is a hung parliament in Westminster after the General Election next May.

In June 2013, the government said it would make its decision on devolving the tax in the Autumn Statement which Mr Osborne will give to MPs today at a packed House of Commons chamber.

Corporation tax is what companies pay on their profits.

Supporters say it will give a major boost to the economy, sceptics say it will hit public spending with no guarantee of success.

Even if Chancellor George Osborne gives the go-ahead, there will probably be strings attached.

In the Republic, the rate is just 12.5% which makes it more competitive when it comes to attracting foreign investment.

If devolution of corporation tax is agreed, a law will need to be passed at Westminster before next year’s general election.

Stormont will then have to pass its own legislation, setting the rate and the precise rules, which will take up to two years.

European rules mean that any benefit Northern Ireland gets from a tax cut would have to be offset by a reduction in the amount it receives from the annual UK block grant.

That would probably mean at least £200m a year would have to be cut from public spending.

North Belfast DUP MP Nigel Dodds said: “We have kept this issue to the forefront of discussions with the government.

“If we are to achieve the aim that HM Government shares with us of transforming our economy and creating jobs and wealth for our people, then we need to hear progress on this issue from the chancellor.”