HOMES ATTACKED IN THIRD NIGHT OF TROUBLE IN EAST BELFAST 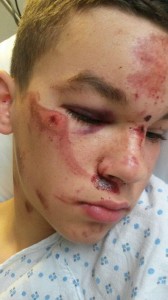 POLICE are investigating after homes were damaged in east Belfast during a third night of trouble.

Windows of two houses in the Short Strand area were broken just after 6 pm last night during rush hour traffic.

A woman in her 70’s was treated for shock and cuts from flying shards of glass after the attack at her home.

The PSNI believe the windows were smashed by youths hurling stones at them.

On Monday a police man was injured during the trouble.

Teenage boy Jordan Else (pictured right) was viciously assaulted by a group of men in the area.

He was treated in hospital and needed staples to a head wound.

Local area commander Chief Inspector David Moore has asked parents to ensure they are aware of the whereabouts of their children.

“I would appeal to parents to know where there children are in the evening.

“The terrible result of this trouble is that we will have another generation of young people being taken to court which could affect job opportunities and even travel abroad because of a criminal conviction.”

“This is yet more evidence of the fallout from the ongoing orchestrated attacks taking place in east Belfast,” he said.

“I want to repeat that all incidents at the interface in east Belfast should end now and residents there should be left to live in peace.”

On Monday, police said petrol bombs and missiles were thrown in disturbances throughout the evening in the Castlereagh Street area. A police officer sustained an arm injury in the disorder.

On Sunday, an officer was injured after police were attacked by about 60 youths near Castlereagh Street.