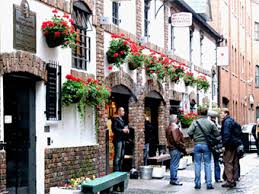 DETECTIVES are questioning a man over Belfast bar stabbing with a broken bottle.

Police say the man was arrested following a report that two males had been injured following a verbal disagreement in a bar in the city centre around 11.20pm.

The attack happened in the back bar of the Duke of York pub in Commercial Court off Donegall Street.

A police spokesperson said: “One of the men smashed a bottle on the table and stabbed the other male with the bottle in the neck and when another male tried to intervene he stabbed him on the arm.

“Their injuries are not thought to be life-threatening.

“If you see anything suspicious in your area please contact us on 101 or anonymously though Crimestoppers on 0800 555 111.