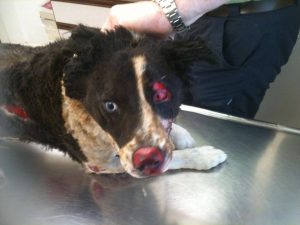 THE boozed up thug who set a family’s pet dog alight has been jailed today for just TEN months.

Andrew Richard Stewart, 23, from Wellington Parks, Moira, was handed down a 20 month sentence at Belfast Crown Court dousing Cody the doge with flammable liquid and setting her on fire.

He was ordered to serve 10 months in custody and the remainder on supervised licence following his release in August 2015.

But supporters of animal rights slammed the sentence saying he should have got longer.

One posted on a Facebook page: “Death would be the best sentence. An eye for an eye.”

Stewart will also have to pay the family £2,600 toward the costs of the vet fees the family incurred after she came home following the attack.

The attack happened in August 2012.

Cody survived for two weeks with the help of a brilliant team of vets who fought valiantly to safe her life.

But in the end her injuries were so horrific that it was decided it would be better to put her sleep to stop any more suffering.