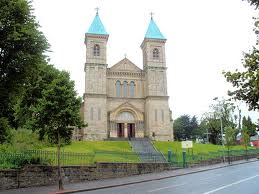 THE PSNI say officers cheated death or serious injury after dissident republicans hurled a pipe bomb at a police vehicle as it passed a Catholic Church in north Belfast.

The device was lobbed as a patrol vehicle drove along the Crumlin Road near the Holy Cross Catholic Church around 12.45 am this morning but failed to explode.

Five minutes later the local parish priest received a call about the attack who then alerted the PSNI.

Police had to evacuate eight nearby homes while Army Technical Officers examined the device.

The ATO carried out a controlled explosion on the device around 8.30 am and found it to have been viable.

The controlled explosion caused damage to the railings at the church.

Local police boss Chief Supt Nigel Grimshaw said: “It was made with a degree of sophistication that causes us great concern and it bore the hallmarks of dissident republicans”.

He added: “The device, which has now been made safe, was described by ATO as both ‘advanced’ and ‘sophisticated’ and was clearly capable of killing the police officers in the vehicle had it exploded as those responsible intended,” he said.

“This was a shameful attack on officers who each day go out to serve this community and keep people safe and must be outrightly condemned.”

The senior officer said “such disruption to community life” was “totally unacceptable”.

“People should not be subjected to such inconvenience and disturbance to their everyday lives, particularly where families with young children, the elderly and vulnerable are forced out into the cold in the early hours of the morning,” he said.

“The alert also had a significant impact on traffic using the Crumlin Road for the morning commute and for parishioners attending morning Mass at Holy Cross.”

Ten o’clock Mass was celebrated this morning but only a small number of people attended because of the alert.

Priests in the monastery were unable to leave the grounds because of the security situation.

The attack has been widely condemned.

DUP North Belfast MP Nigel Dodds hit out at those behind the attack with a lethal device.

“This security alert has caused massive disruption to the evacuated households, to early morning traffic and to those who planned to attend the church this morning.

“Those responsible for this device cared nothing for the disruption and the fear which they have caused. Their criminal actions are despised by the vast majority of society.

“I urge anyone who can assist the police to identify those responsible and to bring them to justice to pass that information on without delay.

“We are again indebted to the army bomb disposal officers who are working to clear this alert and to protect members of the public from any danger.”

Secretary of State Theresa Villiers also condemned those responsible for the device.

She said those behind the attack had no popular support and she would encourage anyone with any information to pass it to the police.