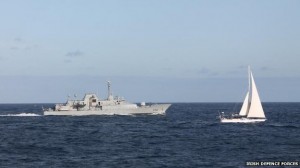 THREE men have been arrested on the high seas after a tonne of cocaine worth around £60 million was seized off the coast of Ireland.

The shipment was intercepted on board the 18 metre yacht Makaybella off the coast of Cork during a covert surveillance operation by Irish authorities.

The suspects who were arrested off Mizen Head will be quizzed today by detectives from the Garda’s National Drugs Unit along with Revenue and Customs investigators over the illegal importation of the Class A drug.

The operation started on Tuesday and finished on Wednesday evening.

They were acting on intelligence provided by the UK’s National Crime Agency in the UK and the French customs service.

Two Irish naval vessels, the LÉ Niamh and the LÉ Roisin, were involved in the operation to halt the yacht in its tracks.

In a statement, the Irish Defence Forces said: “The LÉ Niamh, supported by LÉ Roisin, positively identified a suspect vessel in a covert surveillance operation.

“The decision was made by the JTF situated in the Naval Operations Command Centre in Haulbowline to deploy an armed naval boarding party, which resulted in the successful detention by Revenue’s Customs Service of the yacht, suspected contraband and the crew of three,” it added.