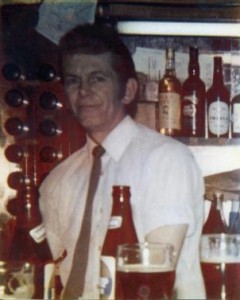 EXCLUSIVE: ‘WAKING The Dead’ detectives arrested a man today after receiving a statement relating to an unsolved murder almost 40 years ago.

Detectives from Serious Crime Branch have today arrested the 61-year-old man as part of an investigation into the murder of a barman in the Shankill Road area of Belfast 38 years ago.

Alec Jamison (47) was found shot dead in a derelict house at Argyle Street in the Shankill area on 5 March 1976. He had been reported missing a week earlier by his family.

The case has been re-opened by detectives from Serious Crime Branch following the receipt of new information.

Belfast Daily understands that detectives received a statement relating to the murder which prompted the arrest.

The suspect was arrested in Crumlin this morning and has been taken to the Serious Crime Suite at Antrim police station for questioning.

The officer leading the investigation, Detective Chief Inspector Justyn Galloway, said: “Alec Jamison was well-known in the Shankill area as a barman. He had worked in the old Salisbury Bar on the Shankill Road and that is the last place he was seen alive.

“Alec was in the bar on Saturday 28 February 1976 and was in the company of a group of men. A week later his body was found with gunshot wounds in a derelict house at Argyle Street.

“I am aware that Alec was involved with the UDA and that he may have been in dispute with or fallen foul of some of its members. This is one line of enquiry which we will pursue.”

Police have issued a photo of Alec Jamison which was taken as he worked as a barman in an attempt to jog people’s memories about what had happened to the father of 8 children.

DCI Galloway said: “I appreciate this happened a long time ago but I believe there are still people in the area who will remember Alec and may have information about what happened to him.

“I am appealing to anyone who saw Alec between the time he was in the Salisbury Bar on Saturday 28 February with a group of men and when his body was discovered in Argyle Street on Friday 5 March to contact police.

“New information has been made available to us. I believe there are people in the community with more information which could help us progress our inquiries further. Despite the passage of time, we will act on any information given to us.

“I would ask people in the Shankill to look at Alec’s photo and remember a man who worked in local bars providing a service but who ended up being ruthlessly murdered, leaving 8 children without a father.

“If you know anything about what happened or who was involved, please talk to police. The number to call is 07717 473543 or email MIT3@psni.pnn.police.uk .

“Alternatively, people can call the independent charity Crimestoppers on 0800 555 111 and provide information without giving their details.”