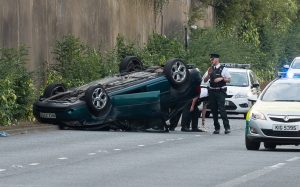 THE PSNI today launch a fresh offensive against drivers in a bid to cut the carnage on the province’s roads.

So far this year 54 people have died on the roads, just two short of the overall total for last year.

Officers have been ordered to “take no prisoners”, say police sources.

“Anyone caught wearing no seat belt or using their mobile phone while driving will be hit with a £60 fine and three penalty points immediately,” said a source.

“The chiefs are determined to crack down on those driving and breaking the law.”

The move was announced at a meeting of the Policing Board on Thursday.

“Because of our concern with the road deaths this year we have decided that, from tomorrow, we are going to take a firmer approach in relation to some offences on Northern Ireland’s roads,” he told the board.

“But, if we find that you are in breach of one of those three offences we will give you a ticket and we make no apology for that because we would much rather give you a ticket than be knocking your family’s door to tell them you have lost your life on the road.”

He said officers were being told to hit all offenders with tickets.

“Northern Ireland is a small place, we should not have 54 road deaths,” he added