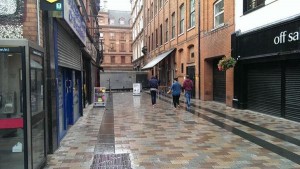 THERE was minor trouble at a republican anti-internment rally in Belfast today.

Loyalists staged demonstrations against the parade that marks the anniversary of internment in August 1971.

A small number of protesters threw fireworks, plastic bottles and coins at the parade. No-one was injured.

The march started at 1 pm leaving the Ardoyne district before heading into the city centre through Royal Avenue.

Castlecourt shopping centre was closed and traders complained of a loss of revenue at the tills as shoppers were forced to stay out of the city as shops shut their doors.

Police had put up a ring of steel around the city centre to counter any repeat of violence like last year.

During the rally in August 2013, 56 police officers were injured after they were attacked trying to keep rival factions apart.

During today’s rally and counter demonstration, police deployed hundreds of officers and had two water cannon on standby.