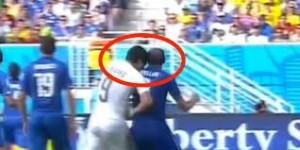 He is also not allowed to be involved in any football activity anywhere in the world for four months.

That means he will not be available to play for Liverpool until October if he remains a player.

FIFA also slapped him with a 100,000 Swiss franc fine saying “such behaviour will not be tolerated”.

Suarez is also not allowed anywhere near football stadiums and will not be able to watch his Uruguay team mates from the stands in the World Cup.

It is not clear whether he will appeal the ban.

Liverpool FC will now have to consider whether to sue him for breach of his contract.

His sickening and unprovoked attack on Giorgio Chiellin could cost him millions of pounds in lost sponsorship deals with 888 poker and Adidas.