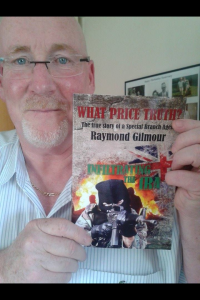 Scots reader with a copy of Gilmour’s book ‘What Price Truth?’

EXCLUSIVE: FORMER security force members are tracking down IRA members fingered by ex-supergrass for a string of unsolved murders.

Belfast Daily understands the unit was set up in recent weeks following the publication of Raymond Gilmour’s book ‘What Price Truth?’.

It is understood the ex-security force members are monitoring the movements of up to eight one-time leading Provos in Derry named by Gilmour as being involved in a sectarian murders across the city during the late 1970s and 1980s.

The Provo gunmen are linked to the murders of:

• Lord Louis Mountbatteen in 1979 in Co Sligo by planting a bomb on his boat Shadow V.

One of those being monitored is the former IRA ‘Officer Commanding’ in Derry Martin ‘Ducksy’ Doherty.

Although he was the ‘OC’, Raymond Gilmour claims Doherty took all his orders from Martin McGuinness who was at times head of its ‘Northern Command’ or ‘Chief of Staff’.

Two others are said to be be former school teachers in Derry, one of whom is a bomb expert who made the bomb used to kill Lord Mountatten and the other one is said to have organised training camps in Co Donegal for the IRA’s ‘Derry Brigade’.

Said a source: “There are a lot of ex-security force members who believe it is time Martin McGuinness and others in the IRA’s Derry Brigade were held to account for their crimes.

“In the eyes of many, Raymond Gilmour has done the public a great service by bringing out his book and shining a light on the activities of McGuinness and others.

“All intelligence gathered on the suspects will be passed to the PSNI. Many people are unhappy with PSNI professionalism and partiality.”

Gilmour’s book has been a huge hit on the internet and also in his home city where sources say it has been selling well.

“People have been buying to see if they are named in it!”

According to security sources, the letter was hand-delivered to PSNI headquarters at Brooklyn in east Belfast earlier today.

Belfast Daily understands the letter has also asked that Gilmour be placed in a “witness protection scheme” while the PSNI carry out an investigation.