FARAGE AND ROBINSON COME FACE TO FACE AT BALMORAL SHOW 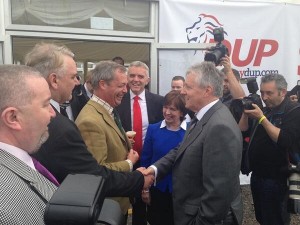 Both party leaders were at Balmoral Show at the Maze where they were canvassing support for their candidates.

There is very little between Ukip and the DUP on paper in their attitudes towards Europe.

Diane Dodds, wife of DUP deputy leader Nigel Dodds, is the party’s candidate for MEP. She topped the poll at last Euro elections when she replaced Dr Ian Pasiley.

Mr Farage was in Belfast on Wednesday alongside party colleagues, meeting with the press at the Europa hotel.

There, he claimed foreign workers were turning Britain into a cheap labour economy.

The number of Romanians and Bulgarians employed in the first three months of 2014 rose 25% year on year.

“Britain is becoming the cheap labour economy and I don’t think that is really socially a very desirable place for us to be.”

A total of 140,000 Romanians and Bulgarians were employed in the UK between January and March, after access restrictions to the labour market for the two countries were lifted at the start of the year, the Office for National Statistics (ONS) said.

Mr Farage said: “When I see large taxi companies who now employ gangs of effectively cheap labour and I see the same happening with the agri-businesses, there are two things happening: one is a degree of job displacement.

“What is happening for certain is wage compression on a very large scale.”

Work prohibitions were lifted for Romanians and Bulgarians on January 1, prompting warnings of a looming surge of immigration from the two countries.

Claims of fully-booked flights and coaches from Bucharest and Sofia at the turn of the year were incorrect and retracted.

Mr Farage visited Belfast to meet local election candidates and claimed millions of lives were being affected by Britain’s lack of a sensible work permit scheme.

He said: “There are millions of families whose take-home pay and living standards are lower than they were 10 years ago.”

The MEP for South East England insisted wanting to put the interests of your own people first was not xenophobic.

He said 485 million people from the European Union could come to Britain if they wanted.

A prominent British Asian Ukip supporter has quit the party, accusing the leader of playing the race card to win votes.

Sanya-Jeet Thandi, a youth member who was previously put up to defend the party in television interviews, said its current direction was “terrifying”.

The departure is embarrassing for Ukip as it tries to fend off racism allegations following a series of scandals involving candidates, and a controversial poster campaign warning about Europeans coming to take UK jobs.

Mr Farage said she has been under terrible peer pressure at university to disavow Ukip but added he was sad to lose her.

“She is a very bright young kid. People change their minds for a variety of reasons but in the space of the last week we have not changed, clearly she has.”

He noted four dozen black and ethnic candidates stood with him on a platform last week.

“What about the figures at the weekend showing the dramatic progress Ukip is making with the black and minority ethnic vote – 16% of that community is now voting Ukip which is more than the Tories and Lib Dems added up together so we are making great inroads. ”

The Ukip leader said he was not complacent about the elections but claimed to be taking votes from the Tories and Labour.

“What is happening in the big northern cities is quite remarkable and we are just beginning to see in the opinion polls over the course of the last ten days or so a quite significant softening of the Labour vote and an increase in the Ukip vote, so we are actually taking votes from both of those sectors.

“Fascinatingly of course a lot of our voters are non-voters in all forms of election so how on earth can you predict what the effect of Ukip could be on British politics anywhere, it is very, very difficult.”

He was questioned on party finances.

“I think it is fairly common practice, certainly at local government level through many parts of England, we expect our MEPs to make some contribution towards the party, we don’t expect them to use Ukip as a means of having a career, we expect them to believe in what they are doing and those that are more comfortably off will give more money than those that aren’t.

He said Ukip was a national political party taking Northern Ireland seriously and added Irish nationalist voters who were sincere would believe that the EU was the worst thing that had ever happened and would see a clear uncompromising message from his party.

“We have approached politics in Northern Ireland as a non-sectarian political party, we absolutely welcome Catholics as members and activists.