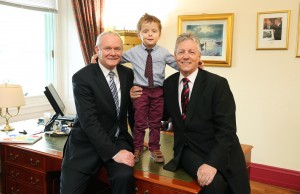 POLICE have confirmed that two teenagers been “interviewed” after posting abusive messages on social media following the death of brave Oscar Know.

The two “voluntarily attended” a PSNI station over the weekend to be quizzed.

“Both fully co-operated with the police investigation,” said a PSNI spokesperson.

His suspension will last until the outcome of an internal club investigation.

Michael Bunting later issued an apology through the club to the parents and family of Oscar Knox and to his parents.

His message on Twitter read: “I would like to issue a public apology on behalf of myself over an incident on social media where I made a cruel comment under a friend’s post about the death of Oscar Knox.

“First and foremost I would like to apologise to the Knox family and to my parents, friends and family, St Michael’s School and Portadown FC.

“I have cause a lot of pain and suffering to the Knox family, my parents, to those at St Michael’s Grammar School and those at Portadown FC.

“I made a severe error of judgement and understand people’s anger.

“I’ll suffer the consequences of my actions and again I’m truly sorry.”

A special service was held for Oscar Knox on Sunday at St Bernard’s Church in Glengormley.

Last night, the skies above Glengormley were lit up with Chinese lanterns in memory of the five-year-old who died after a long battle against a rare and aggressive form of cancer.