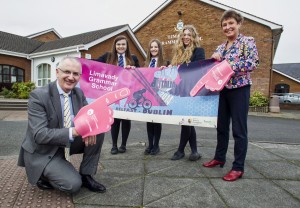 TRANSPORT Minister Danny Kennedy today presented Limavady Grammar School with a copy of a banner designed by pupils as part of the Giro d’Italia ‘Design a Banner’ competition organised by DRD Travelwise NI.

The schools competition was launched in February by the Department for Regional Development (DRD) and the Department of Education (DE) in conjunction with the SportNI, Northern Ireland Tourist Board (NITB), Sustrans and the Public Health Agency (PHA) as part of a programme of events and activities aimed at spreading Giro d’Italia fever across Northern Ireland.

Pupils of all ages were asked to ‘Think Pink’ and to design a banner to be used along the route of the Giro d’Italia. The competition got a great response, with over 240 designs being received. The winning banner was designed by Year 11 A art class, from Limavady Grammar School.

Pupils from the winning school have now been invited to take part in a school trip to watch the Giro d’Italia on Saturday May 10 and will also get the chance to display their banner along the route of the prestigious cycling race.

Minister Danny Kennedy said: “This is an exciting time for Northern Ireland as 200 top professional cyclists from across the globe will arrive here for one of the greatest sporting spectacles on our shores in May.

“The schools banner competition was a platform to promote both cycling and the Giro d’Italia to school children right across Northern Ireland and to get them in involved in the excitement leading up to the event.

“Pupils from the winning school will get the chance to witness this spectacular race and will also be able to display their winning banner to the world.

“With so many entries received for the competition, it was extremely hard to pick an overall winner and I would like to thank every school and pupil that took part.

I would encourage everyone to show their support to the Giro d’Italia and the cyclists taking part by coming out to watch the race as it passes through various locations in Northern Ireland.