‘STOP THE FLOE AT PORTAVOE’ CAMPAIGN GOES TO TOWNHALL 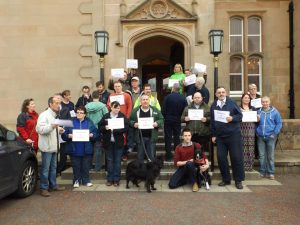 CAMPAIGNERS tonight took their ‘Stop the Floe at Portavoe’ fight to Bangor townhall.

They want local councillors to row in behind them in an effort to stop the draining of Portavoe Reservoir in Co Down.

Work started recently to drain out the well-known reservoir in North Down – raising fears of its impact on wildlife which rely on it.

Northern Ireland Water has started lowering the water level at Portavoe Reservoir, on the road between Bangor and Donaghadee, as part of a 10-week project to carry out essential maintenance when it is completely empty.

But dog walkers and wildlife enthusiasts – have expressed concerns about the impact on the surrounding habitat as the water level drops noticeably.

North Down councillor Austin Lennon questioned the timing of the project which he said was clashing with breeding season.

“There was a vast expanse of shallow wading water where I have seen many nesting birds in the past. Their habitat is now destroyed and this is the breeding season surely this could have been done at a different time,” he said.

The RSPB advises that work of this nature should not be carried out during the breeding season.

Concerns were raised recently after visitors to the beauty spot noticed that water levels had been dropping dramatically over a number of days. Fresh water clams were being exposed and left to die along the waters edge. Water levels have continued to drop and NI Water has confirmed it intends to drain the reservoir completely.

A spokesman said: “NI Water has been liaising closely with NIEA (Northern Ireland Environment Agency) on the draining of the reservoir and as such, put in place a detailed scour management plan to protect and mitigate upstream and downstream impacts of flora, fauna and water quality. NI Water also consulted DARD (Department of Agriculture), Rivers Agency and DCAL (Department of Culture) who currently lease it for fishing.

“Current water levels are not having a negative impact on fish in the reservoir, however, NI Water will continue to work closely with DCAL to ensure that as the level drops, fish removal will be suitably managed.”

The work being carried out is to refurbish a valve at the reservoir which is described as essential health and safety maintenance.