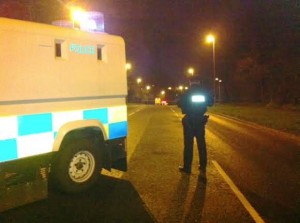 POLICE say that “nothing untoward” was found during a security alert last night.

The PSNI had sealed off a section of Creggan Road in Derry which is known locally as the “Bywash” after a tip-off.

The alert is now over and the road reopened from around 9.30 pm.

A PSNI spokesperson said the alert was prompted after a report of a “suspicious object” being found in the area.

The spokesperson said Army Technical Officers attended the scene and that “nothing untoward” was found.


One Response to ROADS RE-OPEN AFTER SECURITY ALERT