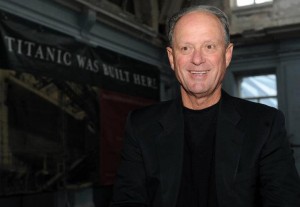 Dr Robert Ballard in the drawing office in Titanic Belfast

The former US Navy Officer, who rose to fame on September 1 1985 when he discovered RMS Titanic in the Atlantic Ocean, will officially launch the Ocean Exploration Centre at Titanic Belfast as part of several engagements at the visitor attraction on March 20, which include a public lecture about his discovery of Titanic.

The Ocean Exploration Centre at Titanic Belfast will offer state-of-the-art technology unique to the venue, bringing valuable insights to the undersea world and its mysteries to visitors and education groups of all ages.

Titanic Belfast’s Ocean Exploration Centre Manager Susan Heaney said: “Visitors, educators and students can now learn about the shores, oceans and marine life around us in a fun, engaging and interactive gallery using the most amazing technology.

“Linking up with E/V Nautilus and Dr. Ballard for live events and being able to watch the ship’s crew at work wherever they are in the world is a fantastic addition to the exhibition at Titanic Belfast. The OEC is an important feature of Titanic’s legacy.”

Dr Robert Ballard said: “Credit must go to Titanic Belfast for its investment and vision in such an important subject matter. We have learned a lot about the oceans from Titanic’s tragedy, lessons that we abide by to this day.

“Titanic is teaching us day by day, and through the new Ocean Exploration Centre at Titanic Belfast we can continue to appreciate the importance of oceans around us and fascinating life within them.

“I’m excited about being at Titanic Belfast to see its new OEC and proud to endorse its aims and values.”

Titanic Belfast is an iconic six-floor building featuring nine interpretive and interactive galleries that explore the sights, sounds, smells and stories of Titanic, as well as the City and people which made her. It is the World’s Largest Titanic exhibition.

Dr Robert Ballard (born June 30, 1942) is a former United States Navy officer and a professor of oceanography at the University of Rhode Island who is most noted for his work in underwater archaeology: maritime archaeology and archaeology of shipwrecks.

He is most known for the discoveries of the wrecks of the RMS Titanic on September 1 1985, the battleship Bismarck in 1989, and the aircraft carrier USS Yorktown in 1998.

About the Ocean Exploration Centre at Titanic Belfast

The new Ocean Exploration Centre at Titanic Belfast will be opened on March 20, by Dr. Robert Ballard, discoverer of Titanic.

The OEC at Titanic Belfast is designed to lift the lid on the undersea world and educate visitors on the mysteries that lie beneath the water in a fun, interactive environment. It will raise awareness of marine life, geology and archaeology and the important role these types of careers play in our future.

It will offer visitors the chance to interact live with Dr. Robert Ballard’s famous exploration vessel E/V Nautilus, and will provide a hands-on workshop space for educators and students of all ages.