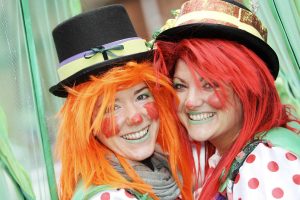 St Patrick’s Celebrations, town centre, Downpatrick, Co. Down, March 17. The St. Patrick’s Day celebrations will showcase Downpatrick as one of Ireland’s most ancient and historic towns, with a re-enactment celebrating St Patrick’s return to Ireland as a bishop, a Carnival Parade through the streets of Downpatrick as well as a host of other family entertainment.

Ballycastle & District Horse Ploughing Championship 2014, Ballycastle, Co. Antrim, March 17. The popular, traditional ploughing match has been taking place in Ballycastle for 100 years, attracting ploughmen from throughout Ireland offering a great day out for the whole family.

Keady Community Festival, Keady, Co. Armagh, March 17. Enjoy a St. Patrick’s Day Parade through the streets of Keady for a great family day out as well as face painting, assault courses, dance and Irish classes, arts and crafts and much more.

Give My Head Peace, The Braids Arts Centre, Ballymena, Co. Antrim, March 19. Northern Ireland’s most dysfunctional family are back with a brand new show for 2014 with topical satire, top class stand-up comedy from Tim McGarry and plenty of laughs.

Kimmie Rhodes, Ardhowen Theatre, Enniskillen, Co. Fermanagh, March 22. American singer-songwriter Kimmie Rhodes is a prolific artist who has recorded and released a total of fifteen solo albums as well as writing and producing three musical plays and has built a solid fan base in Northern Ireland over the years.

A Boy and his Box, Limavady Theatre, Limavady, Co. Londonderry, March 20. Young adventurers should come along and hear the story of a boy, his box and his vivid imagination with live drawing, projection and quirky tunes celebrating the amazing world of a child’s imagination.

Waggy Races at Castleward, Castle Ward, Strangford, Co. Down, March 23. Northern Ireland’s first canicross event, a cross country fun run where dogs and their owners sprint, jog or walk together. The 5km Waggy Races course starts at the Mansion following the trails towards the Lough and is open to dogs of all shapes and sizes.