POLICE have hailed three crooked professionals being carted off to jail for masterminding a money laundering operation involving a series of mortgage and loan frauds in Co Armagh and Louth.

The racket was smashed by detectives from the PSNI’s Serious Crime Branch as part of ‘Operation Radix’after their scam to cash in on the property boom was rumbled.

Peter Creegan was sentenced to three years (2 in jail, 1 on probation);

Peter Brassil was sentenced 2 years (1 in jail, 1 on probation);

Damien Mallon was jailed for 1 year.

The officer who led the Organised Crime Branch investigation codenamed Operation Radix, Detective Chief Inspector Todd Clements, said: “Our investigation began in 2008 when we were advised by First Trust Bank about irregularities at its Newry branch. This marked the start of a massive investigation centred on three suspects and their activities in submitting, processing and sanctioning loans and mortgages. Loans were applied for using either bogus identities or the names of individuals who had no knowledge of the applications.

“Each defendant used their respective positions of trust to obtain loans to buy land or properties in Armagh and Louth between 2002-2008 when the property boom was at its height. These were sophisticated and well planned frauds which involved serious breaches of trust.”

More than 100 police officers conducted a series of searches in 2009 in south Armagh to recover documents and other materials as part of the investigation. It took one month for 30 detectives to catalogue all the papers. The admissions made in court amount to more than £3 million and involve eight properties.

DCI Clements said: “This was a huge money laundering scam using interest-only loans which involved a severe breach of trust.

“The principal victim was the First Trust Bank which has suffered a significant loss. But there are other victims, private individuals whose identities have been protected by the court, who have suffered a devastating impact on their lives as a result of the criminality perpetrated by these professional individuals.

“My officers have worked for years on this investigation, following a complex international trail of documents, false identities and undisclosed companies to build a case and liaise with colleagues in the Public Prosecution Service to bring this complex issue to a successful conclusion in court.

“Organised Crime Branch will pursue any individual, regardless of their professional standing, if they are involved in organised crime. 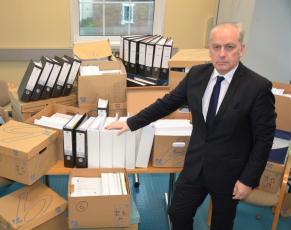 “Today’s sentencing marks the latest stage in our investigation. These defendants have been the subject of financial restraint orders for a number of years and we will now be seeking confiscation orders to recover some of the money stolen from victims.”