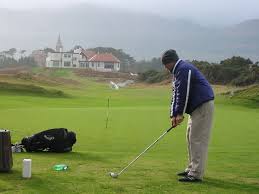 IN a surprise move, the Irish Open in 2015 will be hosted by Royal County Down.

It will be the first time in 75 years the coveted event has been held at the Newcastle course beneath the shadow of the Mourne Mountains.

The decision has been welcomed by south Down SDLP MP Margaret Ritchie who said she hoped the tournament would help boost the “local economy and tourism”.

Royal Portrush was expected to stage another Irish Open in 2015 after the success of the tournament on the north coast two years ago.

The 2012 event was made possible through funding by the Northern Ireland Executive and a similar investment is expected next year as well.

Jamie Donaldson won the 2012 Irish Open at the end of a week that saw attendance records broke.

But Northern Ireland is still hoping that one day that the powers that be in R & A will give the nod for the British Open to be played at either Portrush or Newcastle.


One Response to ROYAL CO DOWN TO HOST 2015 IRISH OPEN