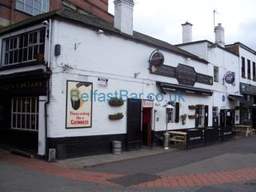 A man who threw an unlit petrol bomb into a Belfast city centre bar after he was ejected for wearing tracksuit bottoms walked free from court today after the judge said it was a “peculiar case”.

Belfast Crown Court heard that Campbell had been drinking all day in the Bank Street pub and around 6.15 pm he was asked by bar staff member Damian Flynn to leave as he “appeared to be drunk” and was wearing tracksuit bottoms which was against the bar’s dress code policy.

A prosecuting solicitor said Campbell lifted a pint glass and smashed it on the ground, causing cuts and grazes to Mr Flynn’s leg.

“Mr Flynn tried to move Mr Campbell away from the bar but Mr Campbell grabbed him in the groin area. Then Mr Campbell walked out.”

Belfast Recorder Judge David McFarland heard that Campbell then walked a mile to a petrol station on the Shankill Road, bought a bottle of lemonade, emptied the contents and filled it with petrol before heading back to the bar, arriving around 7pm.

“Mr Flynn was serving behind the bar when all of a sudden he heard a smashing noise on the last order bell and then smelt petrol fumes,” said the prosecution solicitor.

“At that point, he saw Mr Campbell move away from the bar. Mr Campbell was restrained by a number of customers before police were called.”

He was arrested and taken to Musgrave Street police station and the court heard he made a number of admissions to police officers before and after his arrest.

He told police: “Yes I threw the petrol bomb. I admit it. It wasn’t lit. I threw it at that bastard who worked in there. I just wanted to scare him. I have been stupid.”

Campbell admitted he was drunk and was “sorry” for what he had done and said he was “embarrassed”.

During interviews under caution, he told police that he had gone to the petrol station, bought the petrol and used his sock as a wick.

The court heard that Campbell was found to be wearing only one sock and his other sock was found at the scene of the petrol bomb attack in the bar.

The prosecuting solicitor said that there were a number of aggravating factors. “Throwing a petrol bomb in a public place, such as a bar, is a dangerous act. 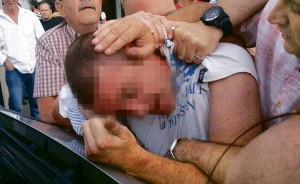 “Even though the petrol bomb was not lit, it is all the more dangerous given that the bottle contained flammable liquid and was thrown into a bar.”

Judge McFarland heard that Campbell had already been dealt with at Belfast Magistrates’ Court for assaulting Mr Flynn and received a probation order.

A defence solictor told the Belfast Recorder: “It is fair to say that the circumstances in this case are rather bizarre.

“He accepts full responsibility for his actions and thankfully nobody was hurt.

“He had no intention of causing injury to anybody. He didn’t have a lighter or matches on him.

“At his police interview he said: “I am sorry. I really feel embarrassed. I know I have done a wrong thing. I just wanted to scare him. I didn’t want to hurt him. It was a drunken mistake. Tell him (Mr Flynn) I am very sorry.”

The solicitor said that Campbell later told a probation officer: “I am disgusted with myself. I will not be drinking again. Drink is my devil.”

He added: “I have always found Mr Campbell to be very courteous. He has apologised to all concerned and apologises to the court for his actions. It was entirely out of character.”

Judge McFarland said that he accepted that the case had “peculiar circumstances”.

However, he added: “This was a highly reckless act and could have caused serious injury and damage to property.

“But to your credit you made full admissions and I have been told you have been remorseful ever since.”

The Belfast Recorder said that Campbell was currently on an 18 month probation order for the common assault on Mr Flynn and was “responding positively” with probation.

As a result, Judge McFarland said the appropriate way to deal with Campbell was through a combination order.

The judge ordered him to serve 100 hours community service along with a two year probation order which was to start with immediate effect.