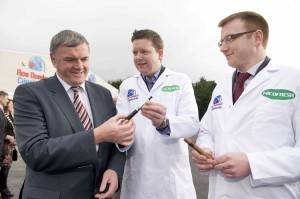 ROSSPORT Pharmaceutical has announced it is to create 138 jobs at a new €5.2 million production site in Corr na Móna, in the Connemara Gaeltacht in Co. Galway.

The company is an innovative supplier of Electronic Cigarettes and associated products into the European market.

Established in Belfast in 2007, the business has experienced a doubling in sales in each of the past four years, and is one of the leading suppliers of the products in the EU.

The new jobs, supported by the regional authority Údarás na Gaeltachta, will support the company’s operations across Ireland and Europe where Rossport is already a leading producer and distributer of E-Liquids and Nicotine Containing Products (NCP).

Recruitment for the jobs is already underway and a number of high-skilled posts are available including graduate roles in quality assurance and regulatory control.

“Rossport has been supplying quality electronic cigarette products to the European market since 2007.

“On-shoring the production stage will allow Rossport Pharmaceutical to ensure consistent quality control of its products, expand the company’s offering in a rapidly developing marketplace, and provide local employment.”

“We are extremely grateful to Údarás na Gaeltachta for its support.

“This facility, which is provided by Údarás, has allowed us to undertake our expansion plans in Corr na Móna and will ensure the development and growth of our business into the future.

“We are seeking to recruit graduate pharmaceutical, R&D, production, marketing, logistics roles at this site in the coming months. Our goal is to produce a consistently high quality product, in a purpose built cleanroom facility, for export across Europe.”

Steve Ó Cúláin, CEO of Údarás na Gaeltachta said the authority was pleased to be in a position to support and facilitate the company’s development plans. He said:

“This company is already well placed in the market, and has grown from strength to strength since the business was established in 2007. The employment opportunities that this venture will generate are crucial to Corr na Móna and the surrounding Gaeltacht area.”

In addition to the new production facility, Rossport has plans to increase its retail footprint across Ireland.

Further store openings will eventually see the total number of employees rise from 55 to 264 by the end of 2015.

Its sister company Rossport Retail Services operates 20 Kix stores throughout Ireland. This is set to grow by a further 50 stores over the next 18 months.

Rossport Pharmaceutical primarily sells its Nicofresh range of Electronic Cigarette products into the German, British and Irish markets, as well as selling into a number of other European countries.

As a result of the expansion plan, Rossport Pharmaceutical will invest €5.2 million, and will receive substantial employment and training grants from Udarás na Gaeltachta to support those positions being created in Cornamona.

Údarás na Gaeltachta is the regional authority responsible for the economic, social and cultural development of the Gaeltacht. Údarás encourages investment in the Gaeltacht through a range of generous incentives for new enterprises and through support and assistance for existing businesses.

Údarás is an implementing agency for the development of aquaculture projects in the Gaeltacht areas and works closely with BIM and the Department of Agriculture, Fisheries and Food in ensuring the smooth implementation and management of projects that are funded by NDP/EU funds.

Electronic Cigarettes provide a healthier alternative to smoking traditional cigarettes, and the market for these products has experienced rapid growth in recent years and is forecasted to increase further in the future.


One Response to PHARMACEUTICAL FIRM TO CREATE 138 JOBS