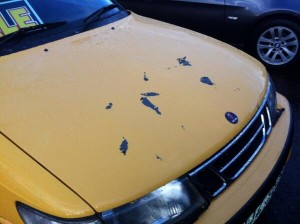 One of the cars damaged with acid at the dealership

DETECTIVES have launched an investigation after paint-stripping acid was poured on 26 vehicles at a car dealership.

They said they believe three men were involved in the incident.

The attack which took place at the Belfast Road premises in Bangor, Co Down after midnight on Monday.

A PSNI spokesperson said “substantial” damage was caused to vehicles parked in the forecourt.

Police estimate that more than £50,000 of damage was caused.

Bangor detectives have appealed for anyone with information about the attack to contact them on 0845 600 8000.