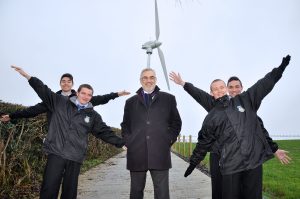 PUPILS from Corpus Christi College in Belfast drew engineering inspiration from a visit to a Simple Power wind turbine.

The Year 14 Science class were given a tour of the company’s single wind turbine at farmer Jim McCord’s farm in Randalstown, County Antrim.

Around 12 students took part in the visit, accompanied by Simple Power’s Chief Executive, Philip Rainey, who explained how the wind turbine was built, how it produces renewable energy and how this clean energy is then transported to the Northern Ireland grid.

Mr Jim Donnelly, Science teacher at Corpus Christi College, says: “Having the tour of the turbine was an excellent chance for the pupils to get a close look at some of the things we’ve been talking about in the classroom.

“The pupils are currently undertaking a renewable energy project and had a lot of questions to ask about the wind turbine.

“The information we gathered will be extremely helpful. It was also interesting for the students to see, not only physics in practise, but the benefits that developments like this bring to farming families and the rural economy.

“It made a real impression on everyone and was an excellent opportunity for pupils to bring their learning to life.”

Simple Power’s Philip Rainey said: “It’s inspiring for us to see the interest there is amongst young people in renewable technologies.

“We believe it’s very important to show students how natural resources like wind are being utilised to create a new electricity market, securing energy supply for the future at an affordable cost while reducing carbon emissions and protecting the environment.

“It is also important for A-level students to understand the many employment opportunities that have come with renewable energy in Northern Ireland, ranging from highly skilled science and engineering roles to careers in construction and maintenance.”

The students were also introduced to the company’s maintenance and engineering team, who professionally service and maintain its wind turbines.

Simple Power enables farmers and their families to contribute to renewable energy generation, helping the environment while also turning their land into a sustainable and reliable source of income.

The locally-founded company, which works in partnership with the farming community, plans to develop a minimum of 200 medium scale 250kW wind turbines on farms throughout Northern Ireland.