BRITAIN’S GOT TALENT IN BELFAST THIS WEEKEND 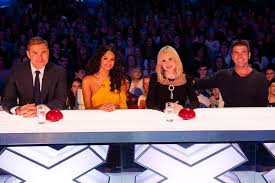 BRITAIN’S Got Talent rolls into Belfast this weekend.

Heading up the entourage is music guru Simon Cowell who is bringing his BGT judges auditions to Belfast for the first time.

The Waterfront Hall is the venue and the date is Saturday, January 18.

The notorious TV talent show will be rolling his eyes in horror, unleashing acid tongued critiques or dazzling the chosen few lucky contestants with his Hollywood smile next weekend.

Fellow Britain’s Got Talent judges — Amanda Holden, David Walliams and recent first time mum, Alesha Dixon — will jet in with Simon to cast their eyes over our local talent.

Genial Geordie presenters Ant & Dec will also be enjoying some Belfast banter and Northern Ireland craic with the contestants at the Waterfront Hall auditions on Saturday, January 18.

Britain’s Got Talent producers have held initial auditions in Northern Ireland three times before in the series’ seven year history.

But this will be the first time that auditions will be held in front of the judges and an audience in Northern Ireland.