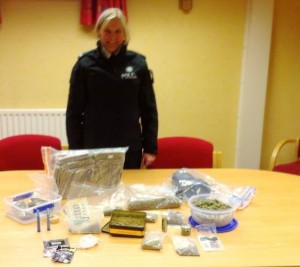 POLICE have put on show the fruits of a drug and cash bust yesterday.

One person was arrested after suspected drugs, including Cocaine, and £53,000 in cash were seized by police in Strabane yesterday.

The black bag at the back of the above picture contains the £53,000 seized.

The discovery was made by members local Neighbour Policing Team (NPT) during a search of a property in the town.

As well as the cash and suspected Cocaine, drugs believed to Ecstasy and Cannabis and a variety of so called “legal highs” were also recovered.

A PSNI spokesperson has praised members of the public for their assistance in finding the haul.

The spokesperson said: “These results would not be possible without the continued help and support from the community.”