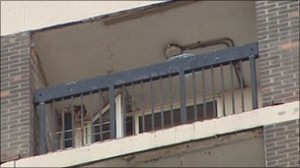 Fire broke out in this flat at Grainne House, north Belfast in January 2011

A MAN today admitted starting a fire in a tower block of flats in north Belfast.

Edward James Michael Dixon (49) pleaded guilty at Belfast Crown Court to a charge of arson by being reckless as to whether life was endangered after the fire broke out almost three years ago.

Dixon, of Kinnaird Close, Belfast, will be sentenced by Belfast Recorder Judge David McFarland on January 24 next year following the completion of a plea sentence report.

He was released on continuing bail.

Six people had to be rescued after the fire broke out in the early hours of Sunday, January 9, 2011 at flat 16E Grainne House in the New Lodge district.

A number of floors in the Housing Exexcutive-owned building had to be evacuated at the time and residents were housed in a nearby community centre while the fire was put out.

Dixon was later arrested and taken into police custody.

At the time of the incident, fire officer Martin McDonnell said it was a “very dangerous” situation for residents and firefighters.

“They had all been trapped in their flats due to the heavy smoke on the 16th floor,” said Mr McDonnell.

“Once the windows in the flat broke, the wind had a big effect.

“It intensified the fire but we were able to put all our training into practise and we got the fire extinugished pretty quickly.”