SECURITY MEASURES TO REMAIN AT UNDER THREAT PSNI STATION 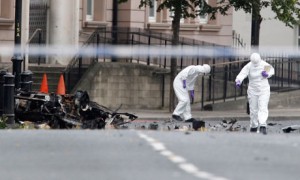 TIGHT security measures restricting parking around Derry’s police headquarters are to remain, the PSNI in the city have said.

It had been reported that security barriers at Asylum Road next to Strand Road police station were to be removed as part of ongoing refurbishment work at a conservation area next to the fortified base.

Social Development Minister Nelson McCausland said an additional £430,000 was to be used for ongoing work in the Clarendon Street Conservation Area and would include upgrades to the footpaths and lighting in Asylum Road, Bayview Terrace, Princes Street and Princes Terrace.

However, parking restrictions in place around the station are to remain.

A PSNI spokesperson said: “Measures restricting parking at the side of the station will remain in place.”

At the time, the then District Commander Chief Superintendent Stephen Martin said the increased security measures were in response to a “severe threat.”

He said: `’It is the correct, necessary and proportionate thing to do.”

CS Martin revealed the masers were put in place following talks with a number of people including local residents, the Chamber of Commerce and the City Centre Initiative.

However, CS Martin did say the matter would be “kept under review.”